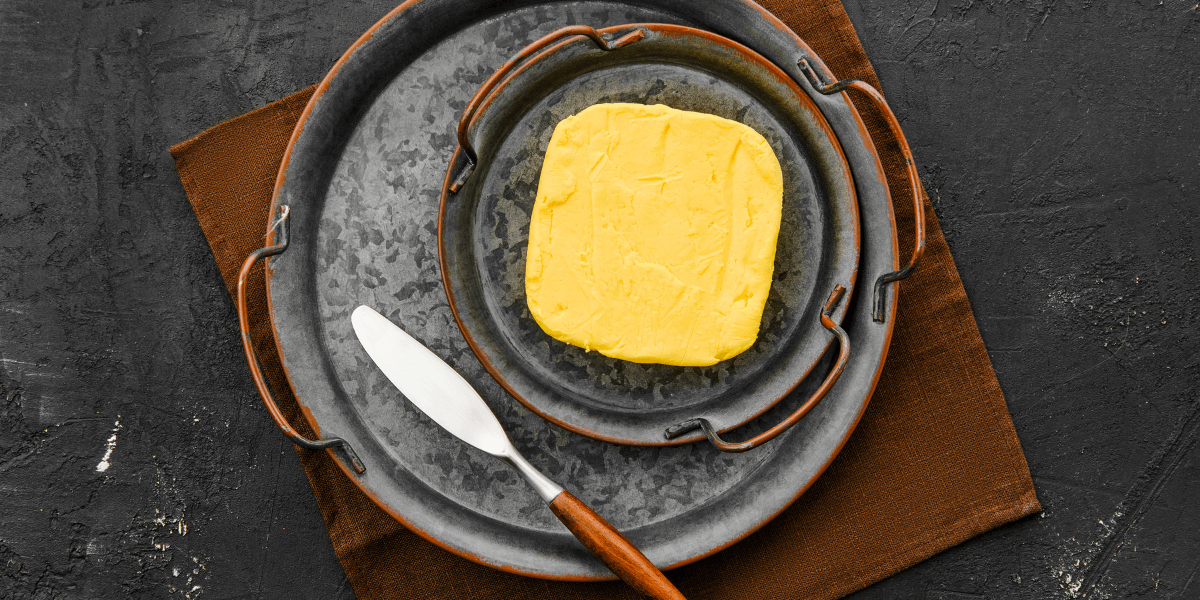 I don’t know about you, but I got tired of having to go to the store to just buy one thing: Vegan Butter. Being a chef, I’ve made butter from cows’ milk before and it’s a pain to say the least. Imagine my surprise when I found out that a vegan butter recipe is so easy to make and it is made with ingredients, I have one hand!

After making my first vegan butter substitute, I realized the error in my ways. Now, I have perfected it into something that every plant-based cook should have in their arsenal.

What is Vegan Butter Substitute?

Vegan butter substitute is an alternative to the mainstream cow’s milk product. Pretty much all of these recipe posts I’ve seen are flavored coconut oil, or refined coconut oil. Which is a good start, but I like to push the envelope, so I have added a few things to make the flavor as good as possible.

In a nutshell, vegan butter substitute is a way heathier plant-based alternative to regular butter. It has the fatty richness you are looking for in a butter. It also works for recipes in remarkably similar ways.

This is a crucial ingredient because its helps with the gelatinization of the rest of the ingredients. I would recommend using refined coconut oil, so you don’t have coconut flavored everything.

This is a neutral flavored oil to use to cut the cost of this homemade vegan butter recipe without imparting any extra flavor.

This adds the fatty aspect to this homemade vegan butter recipe. It adds depth to the flavor profile as well. This also helps with the gelatinization process.

Check this recipe here to make your own vegan buttermilk in seconds!

This is where all the flavor is at! I like to pump up the volume on this ingredient, but the recipe calls for a conservative amount for people who are huge fans of salt.

Just a tiny pinch gives the color you are looking for when you think of butter.

This is an optional ingredient, but I recommend you add it in. This vegan butter substitute really needs a bit of salt.

How to Use Homemade Vegan Butter

I’m certain for all you fresh foodies out there, I don’t need to explain to you how to use this vegan butter recipe into much detail. So, I’m going to just name off a few cooking and non-cooking uses and I promise not to ramble.

Flavor your butter with some spices or herbs and save it for a rainy day! Compound butters come in handy when you’re hungry and don’t have much time to prepare an extravagant meal.  Using a compound butter will help you get some restaurant flavor in minutes!

Take this homemade vegan butter recipe and add a special ingredient to make it whip able! With a little sea salt or agave, you got yourself a quick breakfast on the go!

Add to Your Coffee

Believe it or not many people add butter to their coffee in the morning. Use this vegan butter substitute to add some fatty flavor to your coffee! This is especially popular in the keto community!

Keep the Mold Away

Did you know that rubbing butter on the outside of a cut vegetable or vegan cheese helps preserve it for a longer period of time? We are now you do!

Speaking of vegan block cheeses, check out my vegan parmesan article with a block parmesan recipe!

You ever cut a potato or squash and the slices stick to your knife? Rub a little of this homemade vegan butter recipe on your knife blade and they will stick no more! Just a quick tip!

Keep Pots from Boiling Over

Whenever you are cooking a temperamental soup, sauce, or other recipe sometimes you run into the over boiling pot problem. It happens to the best of us.

Throw a little pat of butter in there and your pot will cease the foamy mess and calm down. It also will make your recipe taste better!

Customize your vegan butter substitute to specific recipes. For example, if you are going to use the vegan butter recipe for a cake, then think about how you want the cake to taste. If the flavors will go well with coconut, then maybe you use regular coconut oil.

You can also change the flavor with the vegan buttermilk. Instead of using lemon juice in your buttermilk recipe, maybe apple cider vinegar will take better in the end result.

Adding, the optional, coconut cream makes the butter softer when it comes out. This is perfect for a spreadable topping, but it also can improve baking recipes as well. If you decide to add the coconut cream, you could potentially add some leavening characteristics to your baking recipes.

Be sure not to use sweetened nondairy milk for your vegan buttermilk! It doesn’t taste very well. It is also a lot harder to use.

If you are making buttercream icing, then using a sweetened nondairy milk for your vegan buttermilk may be beneficial. Me personally, I would much rather sweeten it myself.

Be careful to blend this vegan butter recipe smooth, but not to long. If you blend this substitute to long it will break. The reason why this happens is because the blades heat up as they keep spinning. This heat source will cause the coconut oil to melt and break the emulsified vegan butter substitute.

Is this recipe the same as margarine?

Its remarkably similar in the sense that they are both made out of emulsified vegetable oils. Although, margarine is not always vegan though. You could argue that all vegan butters are margarine, but not vice versa.

By comparison to cow’s milk butter, this homemade vegan butter is astronomically healthier. It does consist of mainly oil, so it definitely is not fat free.

Can you freeze homemade vegan butter?

Yes, this vegan butter substitute actually freezes really well.  I would portion it so you can pull the butter out as needed. Using ice cube trays are perfect for this.

Why do I have to use nutritional yeast?

Nutritional yeast is the flavor in this recipe. It also blends up really well so where you can’t tell its there. I supposed you could replace the nutritional yeast with msg or white miso, but its not going to be the same.

Do I have to use vegetable oil?

Can I bake with this recipe?

Yes, this is an all-purpose recipe. You can use it for baking and many other cooking and non-cooking needs.

Why is there turmeric in this vegan butter substitute?

The turmeric is simply, and aesthetic is this recipe.  It doesn’t impart any flavor, it just gives the recipe a more approachable appearance.

Now that you have made your vegan butter substitute, check out some more recipes to use it in!

Big Thanks to the Vegan Blogs out there that spread the knowledge of plant-based eating, more specifically