My Thoughts on Vegan Icing

Vegan Icing is one of those food items that is a “guilty pleasure” to say the least.  You do not really need it, but you eat it on special occasions or when you are feeling emotional. Either way icing, or frosting, is delicious and a delicacy in any cuisine or culture. Icing is one of those recipes that is way better homemade, and it is so easy to make too. So, buying it after reading this article is just plain lazy!

The general consensus of icing and its origins date back to the late 1400’s. This delicacy was designed to coat or top marzipans. A marchpane is the early spelling ( the name changed in the 1500s) for what is now called a marzipan. A marzipan is a confection made of pureed almonds tossed with powdered sugar. This treat was good, but it needed a little extra. With this concept and idea, the frosting was born.

Icing was inseparable from marzipans for a lifetime until the 1600s. During this time a French chef, used icing to hold together multiple layers of cake and blew the minds of people everywhere. As you may well know, a single layer cake does not use icing the way a multi-layered cake does. This chef essentially changed the way the world would view cakes forever.

So, who was this chef? And how did she figure this out? We her version of icing was a “rough draft” of what we use today. Her version of icing was whipped egg whites with powdered sugar then baked off. Yes, that is right, it was cooked. The icing would be applied to the outside of a cake then place into an oven to harden into “ice”, hence the term icing.  In todays world, the recipe she is using is now referred to as a meringue and if baked in the right conditions will dehydrate into a firm shell.

As the years went on, icing was revolutionized yet again by one of the most famous people in history. Queen Victoria of England coined the next use of the icing in the late 1800s. The queen utilized icing for the most epic cake of all time still used very frequently today! The cake we all know as the wedding cake!

Yes, that is correct. Queen Victoria was the first one to design the multi-layered wedding cake with white icing! This cake demonstrated the amount, quality, and expense of the amount of sugar used. During this time, using pounds of sugar for a single occasion cake was considered a sign of wealth.

Wait, there is more! Icing stuck again in the mid-1900s. This is when the first icing was seen on cupcakes! This icing was known as the buttercream icing. I guess you can guess what the secret ingredient was. Butter.

Now days, bakers and confectioners have many different variations of icings and butter creams. These variations include but are not limited to fruit purees, custard, lemon curd, and a lot more. When it comes to wedding cakes, bakers use fondant. Fondant is a dough like candy that is made from sugar, water, and corn syrup. Gelatin is added for sculpting and shaping uses.

Difference Between Frosting and Icing

Frosting and icing seem to be used interchangeably now days. There are subtle differences that distinguish between the two though. Let us jump into what separates these two seemingly alike confectionary toppings.

Icing is used as a glaze on cakes and pastries. Think of a glazed doughnut, the translucent substance on the outside is an icing. On the other hand, frosting is the opaque substance used to coat the outside of a cake.

As I stated earlier, icing has a glossy translucent appearance to it. It has a thinner consistency than its counterpart. Frosting is thick and fluffy, due to being whipped and the fat content. This type of coating is opaque (not see though).

Icing is a sugar-based glaze. It can also contain egg whites, butter, or cream.  Frosting can be cream, or butter based, exclusively.

Icing has a sugary flavor while frosting has a buttery or fatty flavor.

How do you make Vegan Icing and Vegan Buttercream Frosting?

This method is super easy and efficient. Icing is simply combined and mixed thoroughly. Yup, that is it! The only finesse this recipe needs is getting the proportions right. Luckily for you guys I have the perfect vegan icing recipe already formulated below!

This topping requires a couple steps, but it is still really easy. This confection can also be easily flavored with pretty much anything!  So, the possibilities are endless.

9 out of 10 times this recipe starts off with softening vegan butter. Once the vegan butter is soft you begin to beat it until creamy and fluffy. You then add your powdered sugar and continue beating.

You then add a non-dairy milk of your choice and continue beating. At this point you can use the traditional vanilla extract to flavor it. You can also take your own route and flavor it how you like.

Consistency is key when it comes to these recipes. You must think about what application you are using these recipes for. For example, if you are making a glaze for doughnuts, you want a icing that is thin enough to run down the sides of the doughnut but thick enough to grab hold.

When it comes to icing, you have options when it comes to consistency. If you added to much sugar and its too thick, you can simply thin it out with your non-dairy milk. On the other hand, if your icing is too thin, just add more sugar to thicken it up a touch.

For frosting a similar rule applies. You can add your liquid flavoring to thin out a thick frosting. You can also add sugar to thicken a frosting, but beware! If you a flavoring a frosting with a sweet liquid, let’s say strawberry syrup, you need to be aware of the consistency because adding more sugar will thicken it but render it too sweet.

In my experiences, I have found that your icing or frosting does not have to be really sweet to compliment a delicious cake.

Whether you are making a butter/cream icing or a frosting you are going to have to whip sugar into softened butter or cream. The best way to do this is to add your sugar in little amounts at a time. For example, if you have 1 cup of powdered sugar, then add a third at a time into your butter or cream.

Store these confections in the refrigerator in an airtight container in the refrigerator for up to 2 weeks! So, this gives you a little room to plan and make ahead of time if your feeling up to it. One thing to consider when storing icing and frosting in cold storage is the hardening effect. When either of these recipes get really cold, they will firm up making them harder to spread. So, pull out of cold storage an hour or two before using.

If you flavor your icing with a fruit puree that you made yourself, then I would not risk storing that at room temperature. 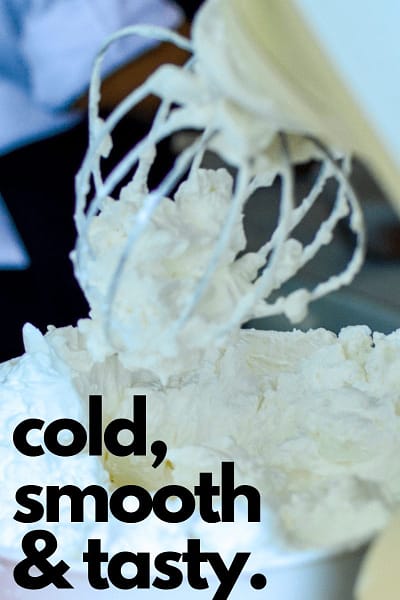 Lemon- Replace vanilla extract with the juice and zest of 1 lemon. 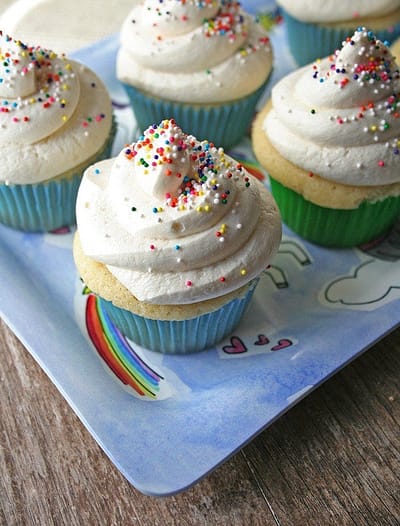 Chef Mason Bostwick
Decadent and Creamy. This vegan buttercream frosting recipe is something every plant based cook should know how to make. This is a heathier version that is made with coconut oil.
Print Recipe Pin Recipe
Prep Time 25 mins
Total Time 25 mins
Course Condiment, Dessert
Cuisine American, Vegan
Servings 12 Servings

Check Out My Latest Posts