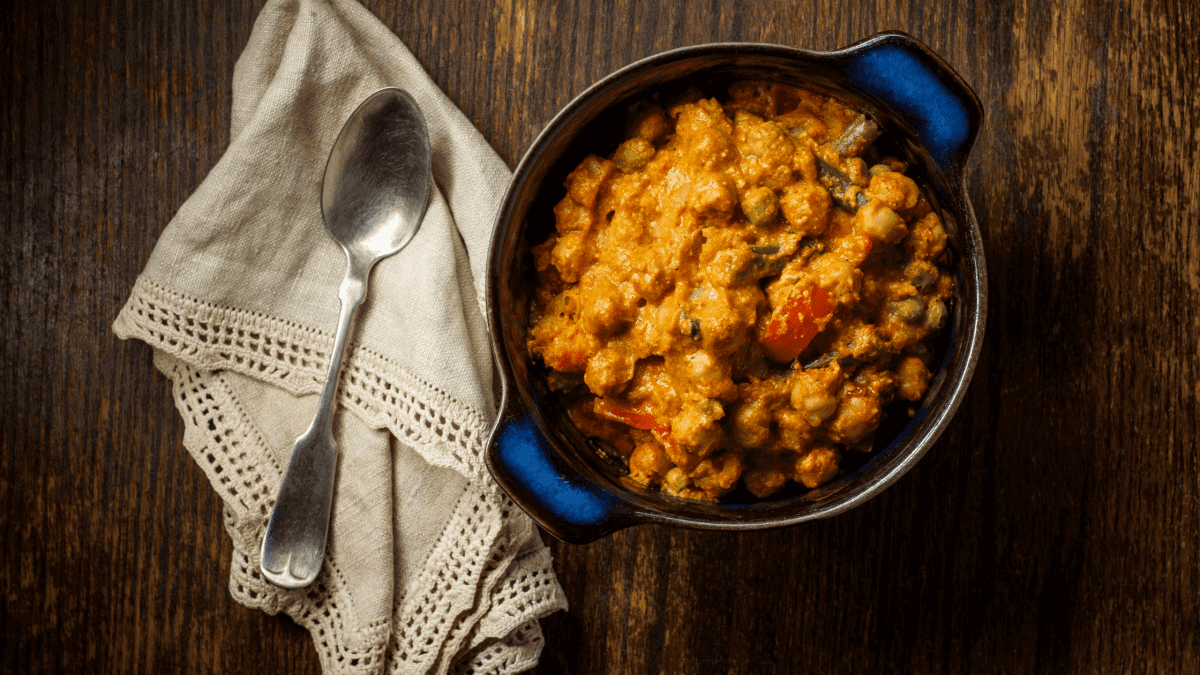 Vegetable korma curry is one of the classier curries in my opinion. I say that because this curry is not just a brute force curry of intense heat, this curry uses a balance of flavor to get its followers. Although this curry does have a little spice, you also pick-up flavors from cardamom and cinnamon rather than just chili peppers that are hotter than the sun!

Vegan korma is something I have enjoyed long before I even became a vegan. I think the first time I ever had korma it was vegan. If made right, then vegan korma will be so good it will surprise you!  I am going to give you the ins and outs of korma and I guarantee you will be dying to try some!

What is Korma Curry?

Korma curry originates from India and it usually consists of meat or vegetables braised in a mild sauce. This sauce is a compilation of yogurt, stock, and spices that are reduced into a gravy of sorts. The vegetables are typically thrown into the sauce while it reducing to cook them through and let flavors marry together.

A closer look into the word “korma” takes us to the Indian sub-continent where the Urdu language is spoken. Korma derives from the Urdu “qorma”, which translates to “braise” in English. This is very fitting considered the entire dish is essentially a stove top braise or skillet braise.

This dish is often referred to as a “mild” curry or a “beginner’s curry”. I believe this is a decent summarization of Korma because it is not spiced for heat, it is spiced for flavor. One could argue that this curry is not a beginner’s curry in that regard because it utilizes some impressively complex flavors to be considered novice.

What is Navratan Korma Curry?

The most common korma in India is called Navratan. Navratan korma, or vegetable korma, is the vegetarian version the of the braised meat korma. Of course, with a couple tweaks here and there, we could easily make vegan korma.

If you traveled to India you would find, like their language, that korma is different from region to region. A Northern India Navratan korma curry would fit the consensus of the dish; being a white gravy-like braised vegetable dish with rich flavor and mild heat. Travel to the southern region and order Navratan korma Curry and you may get a tomato-based gravy which is served very spicy!

So, to answer the question, what is Navratan korma curry? I guess it just depends on where you are. For the most part, you will be getting a mild white/ yellowish gravy with braised vegetables with a rich and creamy flavor.

These two curries are remarkably like each other. Once could say that the only difference is that a vegan korma recipe utilizes all plant-based products rather than using the animal products the Navratan curry calls for.

The cooking methods and ingredients may differ from recipe to recipe and region to region, but the concept is basically the same. Korma is a braised dish with powerful flavors that many people enjoy!

How to Make Vegan Korma

Making Vegetable korma vegan is not awfully hard at all. There are only a few obstacles to get over. We simply need to replace the yogurt, cream and stock. There is a little grey area when it comes to vegan korma because I use a bit tomato sauce to help as a thickening agent and for flavor.

Do not worry this Vegan korma is not spicy by any means, but if you want to make it spicy you can just add a bit more heat to the spice mix!

Making this vegan korma is remarkably simple. You start off by sauteing a little onion with the Vegetable Korma spice mix over low heat. This will be cooking the onion whist toasting the spices, and they will become very fragrant.

While the onions are cooking, you will blend some coconut milk with cashews until they are smooth. We then add vegetable stock, tomato sauce and the cashew coconut milk puree into the pan and bring to a simmer.

Once at a simmer, you add the vegetables you want to eat and cook them until your liking! After a little seasoning with salt, pepper, and a dash of cilantro; you are ready to eat!

Garbanzo Beans add some real sustenance to the dish, and it adds a level of starchiness that complement the creamy sauce. Garbanzo beans are perfect for a vegetable korma.

This adds another layer of starchy texture to work with the garbanzo beans. They also add some natural sweetness which helps me avoid using added sugar. If English peas aren’t your style, then you can swap with potatoes.

Canned tomato is really your best bet in this application. You need to get some real flavor quickly and using fresh just won’t do it.

This is the best way to get the creaminess out of the dish, and the coconut flavor goes really well with the dish anyways. Use the full fat coconut cream if you can.

The earthiness and burst of freshness when using fresh green beans is an awesome addition to a vegan korma recipe. You should try this.

Bell peppers are perfect for people you love the taste of peppers but can’t handle the heat, like me. If you like spicier curries, the change your pepper out for a hotter one.

I love cauliflower, so I am totally biased towards using it. But it does add a different textural element and sustenance.

Trust me on this one! They work so well in a vegan korma recipe! You really should try.

This vegan korma is a mild curry. If you like spicy, then add a few more dried chiles to the spice mix. If you do not like spicy at all then take the chiles out completely.

Add whatever vegetables you like. If you do not care for one swap it out with another! Use this recipe to make your own vegetable korma.

Coconut milk is important because you need to replicate the creamy flavor and texture of the korma curry. I recommend using the full fat coconut milk to establish a good base. If you like your curry saucier, then you could always add a bit more water or vegetable stock.

When cooking a vegan korma recipe, one of your main focuses is to regulate your heat. This way you get an even braise, and you keep the temperature down so your coconut milk doesn’t curdle. The best way to do this, in my opinion, is using cast iron or ceramic skillets. If you have one, use it.

Due to the cream content of this dish, it is imperative that this sauce never reaches a boil. This will curdle your cream and give off a grainy mouth feel and off-putting appearance. Take your time during the cooking process so your vegetable korma comes out prefect!

It’s always good to season your curry towards the end of the cooking process. The reason being, if you season the sauce while it is reducing it will concentrate the flavor. If you use to much you could end up with an overly salty product. Wait till the vegetables are cooked and the sauce is off the heat to season with salt and pepper.

Spices are the determining factor in the success of your sauce. It is important that you keep freshest spices you can. Do not use spices that are more than 3-4 months old.

Toasting your ingredients before using is a great way to add a layer of flavor to your sauce. Simply toast your spices before grinding them into the spice mix. To achieve the best results, toast your spices separately. Spices have different cook times.

There are also cashews in this recipe. It would be wise to toast them off as well. Cashews are astronomically better toasted.

The vegetables are important because they add sustenance while complimenting the sauce. It is important to recognize how your vegetables are prepared and estimate their cook times. If you are using potatoes and peas, you would want to place your potatoes in the sauce before the peas, so your peas do not overcook. If everything is already cooked, you would add them all at the same time.

1. Can I use regular coconut milk if I don’t have cream?

Absolutely and if you don’t like using coconut milk in your vegan korma or vegetable korma then you can use whatever non-dairy milk you want.

2. Can I make this in a slow cooker, or an instapot?

Yes, you can, this recipe is instapot friendly. I wouldn’t recommend cooking it that way, because this vegan korma recipe gets its flavor from the vegetables sauteing in the spice and deglazing with the stock.

3. Is Kurma the same as Korma?

Yes, it is, those are the same word simply different dialects.

4. If I don’t like cauliflower, what can I replace it with?

You can replace the cauliflower with broccoli, carrots, mushrooms, asparagus, squash, or whatever else you want. If you build the sauce right, that’s where the flavor comes from.

5. My vegetable korma came out a bit thick, why is that?

That’s ok, you just need to add a bit more water or vegetable stock to get it to where you want it. What most likely happened is the heat you were cooking on didn’t match mine when I wrote the recipe. That can happen when learning recipes this way.

Awesome blogs that know their Korma Curry! Thanks!!