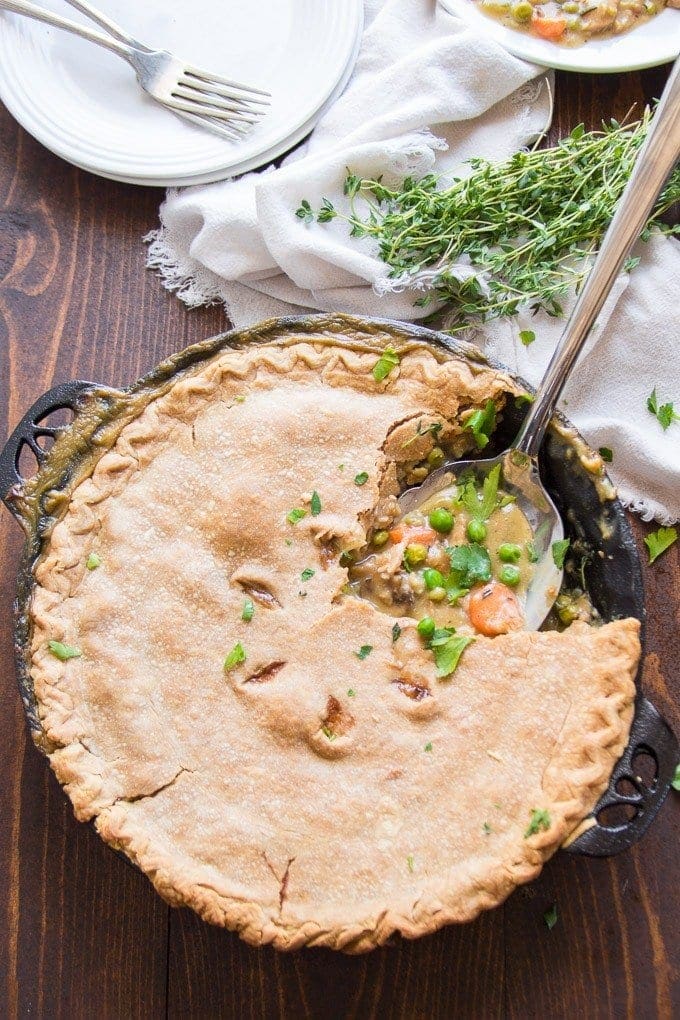 Who does not love a pot pie? This vegan pot pie recipe is going to rock your world! Some of my best food memories is from pot pies of all sorts. There is something about a savory pie that really makes me happy. I know other people feel the same way. Let us get into the ins and outs of vegan pot pie.

The pot pie has a history that dates all the way back to the roman empire.  This savory pastry was served at banquets and other special occasions. Sometimes these pastries even contained live birds underneath that savory crust. Talk about a conversation piece.

Originating in ancient Greece, the pot pie went by the name of “Artocreas”. During this time, the shell was open-faced, as opposed to the closed-shell we see today.

The pie remains dormant until the early 16th century. This recipe was uncovered by the gentry class of England.  This started off as a food trend that went viral! England quickly made it their own by incorporating venison into the pie, making it unique to their region of the world.  Their versions of pot pie were not exclusively venison though, they also indulged in the occasional pork and lamb.

It was not until Queen Elizabeth I’s reign that they incorporated chicken into the pot pie. The pot pie consisted of tiny chicks stuffed with gooseberries. These savory treats were also decorated with different aesthetics like flowers and other elaborate pictures. The pot pie was popular in the royal household because it was a true test of the chef’s skill, while in the lower classes of society these pies were popular because adding the crust helped feed another couple of people. The pot pie stayed in Europe gathering different variations and twists until the 19th century, when it made its way into the new world.

Among the settlers of the new world, with them they brought their pot pie recipes. The pot pie mainly featured robin instead of chicken during these colonial times. As settlers moved west ward, the pot pie began to take on flavors that were indigenous to those particular regions in the United States. For example, a pot pie in Montana will taste different from one in Georgia.

How to Cook A Vegan Pot Pie?

Cooking a vegan pot pie is actually pretty easy. All it takes is a little thought and patience. The first thing to realize is that the pot pie is essentially going to be cooked twice, once on the stove, and once in the oven.  So, we need to think about our vegetables in this situation. We want to cook our vegetables a little bit on the stove, not all the way.  That way when the vegetables go into the oven they won’t overcook. 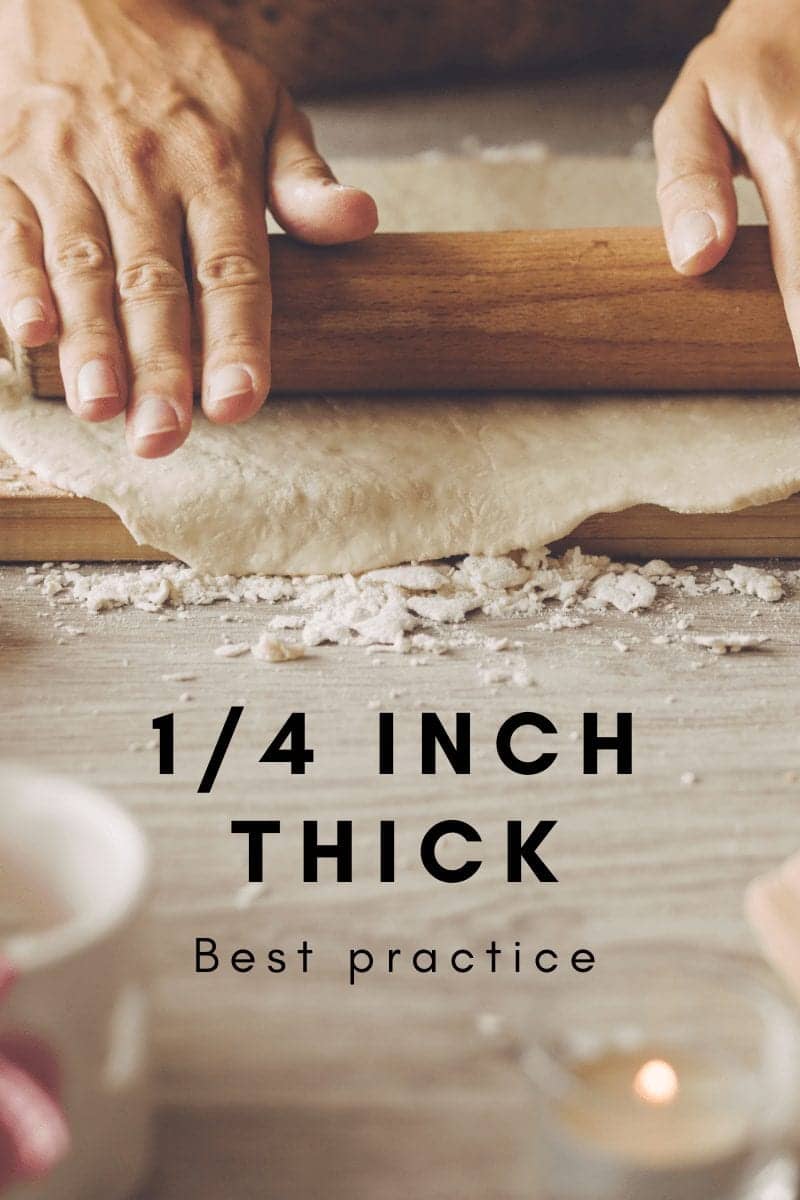 In short, you start off by sauteing your vegetables and dried herbs. Sauté these ingredients for a short period of time. Remember, we do not want to cook them too much during this stage.

The next big step is making the roux and cooking it. Once our vegetables are par-cooked, we will begin to incorporate our flour. The mixture of flour and fat is called a roux. The roux is used as a thickening agent in this recipe. Once the flour is added and incorporated properly, we will begin to toast the roux. This simply means continue to cook it without adding any liquid. The more you cook a roux the darker it gets and the nuttier the flavor.

After that, we will add our liquids to the toasted roux. Once incorporated, we simmer the soup-like filling until thick.

The last part is the easiest part. You simply put the filling into a lined baking pan, put the crust on the top, and bake it off.  I will go into more detail in the recipe below, but these are the basics.

Keep in mind in this recipe the pot pie is cooked twice. So, during the first cooking stage, on the stove, cook your vegetable as little as possible. The vegetable will seem barley cooked when you add your flour to make your roux. This is fine because you are going to cook them in the oven afterward. Trust me the vegetables will be cooked simply fine by the end of the recipe. 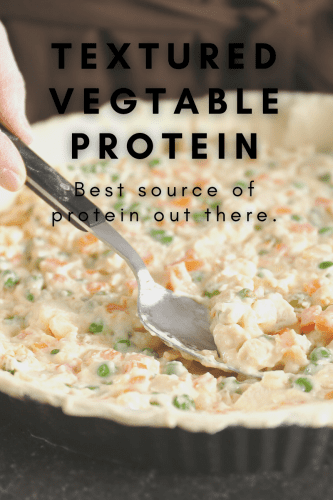 Do not get hung up on the meat substitutes, type of flour, or type of non-dairy milk. All of these things can easily be substituted.  Just make sure your conversions are accurate and you will have no problem executing this recipe.

This particular recipe color and flavor directly correlate. This all begins with the roux. Once you combine the flour into the oil and vegetables cooking in the pot, you start to cook your roux. This is fine, you want to cook your roux a couple of minutes to cook out that raw four flavor. After a few minutes, you can choose to keep cooking your roux by whisking it periodically to keep from burning. The more you cook the roux the darker it will become, the darker it becomes you will get a nuttier flavor.

The best way to move forward with this step, is to add your milk in small doses while whisking. This will ensure that you avoid clumping from your flour mixture. Take this advice seriously, if you add all the milk at once and you get clumps, they are almost impossible to remove without removing the vegetables too.

When applying the top layer of the pie crust, it is important to seal the outer edges so none of the fillings leaks out. With all of the edges sealed, the steam created inside the pie will have nowhere to escape. To remedy this problem, cut a few slits in the top of the crust to ensure the steam escapes from the inside and your pie crust cooks properly.

If you really want to wow your guests, then utilize your pie dough scraps. Take your extra pieces of pie scraps and cut cool shapes out of them. If you are not so handy with a knife, then you can buy cool cookie cutters and use those. All you have to do is place your cool shapes on top of the pie crust and bake it off as normal. This is an easy way to take your vegan pot pie to the next level with minimal extra work. 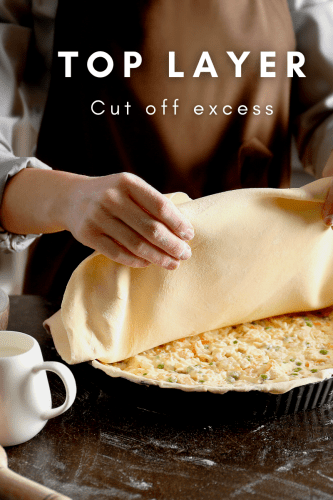 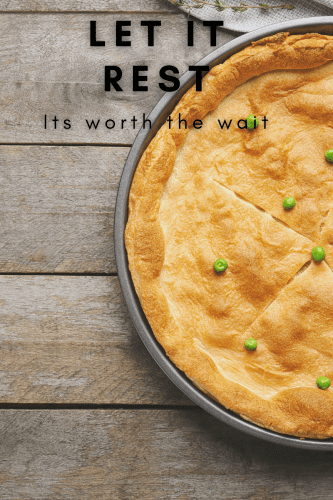 8. gradually adding the liquids to avoid clumping. Let it cook until thickened, this should take about 5-8 minutes.

10. Bake in the oven for 35 minutes or until golden brown and bubbly! It would be wise to let the pie rest for 30 minutes or so the let the filling set, and also the pie will not burn your face off! 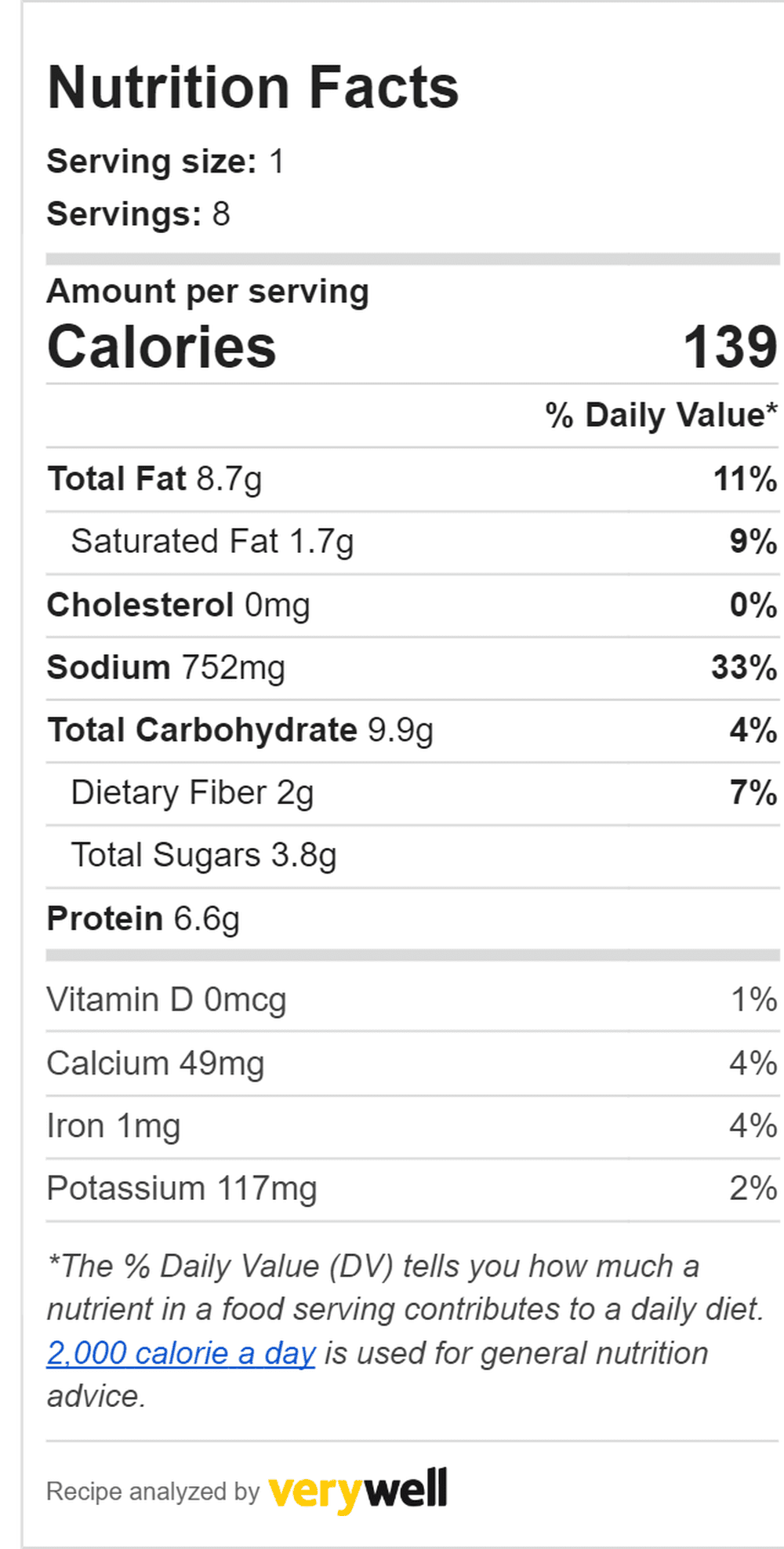 The reason you let your pot pie rest when it comes out of the oven, is because it is extremely hot when it come out. It will most definitely burn your mouth. Another reason is to let the pot pie set. When the pot pie is super-hot, it has not had the chance to really bind together on the inside. So, if you try to scoop some out, it will likely be runny and run all over the place. I know its hard, especially when the pie looks so dang good. Trust me it is well worth the wait.

Absolutely, as I stated before, you can substitute the seitan for anything you want pretty much. A good substitution is tofu or even garbanzo beans. Don’t get caught up of the ingredients as much as you should the amounts.

Yes, you can. So instead of baking the pot pie off. You will cool down the filling and put the pie crust on, ventilate it, and then freeze it. Be sure the pie is wrapped nicely to avoid freezer burn.

Yes, you definitely can add vegetables. Depending on what vegetables you add, you may need to increase the amount of flour or non-dairy milk.  For example, if you add mushrooms to the recipe you will need to add a touch more flour for the roux. The reason being is that mushrooms secrete a lot of liquid when cooked. If you decide you want to add potatoes, just add a little more non-dairy milk to make the filling lose enough to a bake-off.