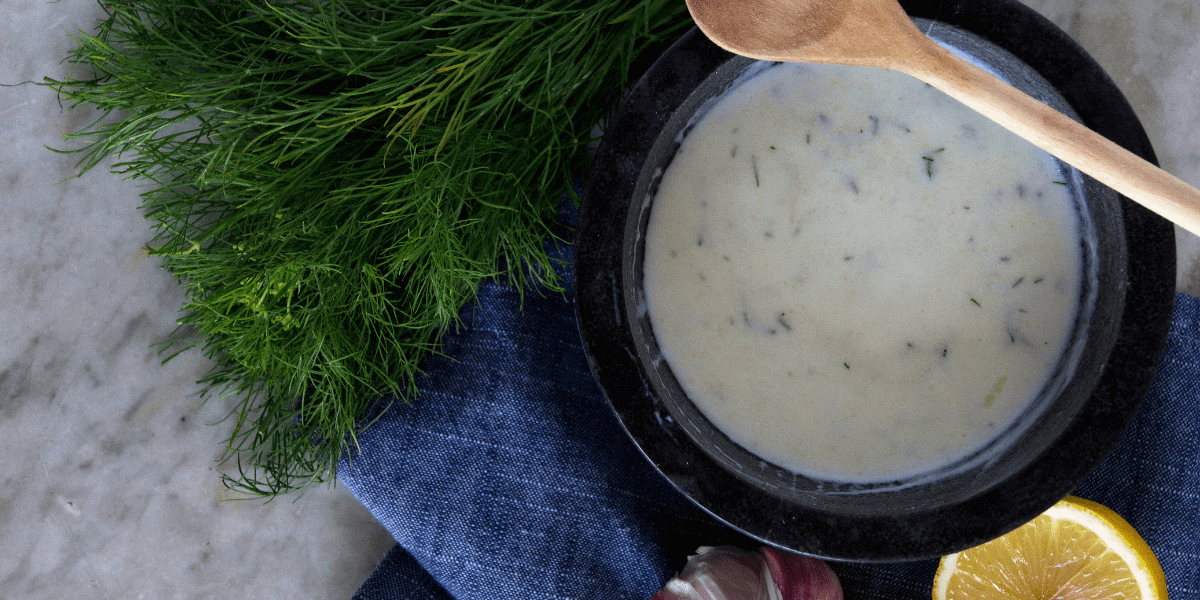 What can I say? Everyone loves ranch dressing, it seems like, so I had to make a Vegan ranch dressing recipe. There was no way around making this post!

As a chef I have made ranch dressing for guests or more occasions that one. Over time I tweaked a few ingredients here and there to make a top-notch recipe for when we need it. Once I changed my diet to a plant based one, I closed that section of my recipe book.

As I progressed in my vegan journey, one day I realized that I didn’t need to rewrite everything. I simply needed to sub out animal products for their closely related plant-based substitutions. The vegan ranch dressing recipe was born! Or better yet, re invented.

No, the store-bought varieties of ranch contain animal products. The mainstream ranch we see in stores usually contains eggs, buttermilk, or some other kind of dairy that makes it a no no for vegans. Good thing vegans are crafty because we got our ways around that.

Vegan mayonnaise is very necessary when making a vegan ranch dressing recipe. Vegan mayo adds a level of creaminess and tang that you just can’t get anywhere else. This is an especially important ingredient when making this.

You can buy vegan mayonnaise at the store. My favorite brand of vegan mayonnaise is Vegenaise by Follow Your Heart. This is the closest store-bought option to the animal product mayo. Another good brand is Chosen Foods Vegan Mayo!

The way I see it, if were making our own vegan ranch then we should make our own mayo. Here are my vegan mayo recipe options.

Vegan sour cream is typically made from vegan yogurt and cashew nuts. So, if you have a nut allergy then you need to be careful about what brand you buy. Follow Your Heart Makes and awesome vegan sour cream, and Tofutti’s Brand is another you may like.

Vegan buttermilk is something you should never buy! This recipe takes 2-5 minutes max, and you don’t even have to leave your home. Chance are you have the ingredients already! Try out this Vegan Buttermilk Recipe and you will see what I mean!

Like any other vegan ranch recipe, this vegan ranch dressing recipe gets its flavor from the herbs and spices infused in it.  You will need garlic powder, onion powder, parsley, dill, dried and fresh chives to execute this recipe.

I like to use white vinegar in this vegan ranch recipe because that is the most traditional. You could also use apple cider vinegar or lemon juice depending on what you have.

How to Make Vegan Ranch

This recipe couldn’t be easier. Once you have gathered all of your ingredients together, you simply mix them all together! You don’t even need containers; you can just combine them one by one in the mixing bowl. Just make sure you mix well, and you are ready to go!

That’s why I love this recipe. It takes no time at all, and its way more delicious when you make it at home then buying it.

How to Use Vegan Ranch

I’m sure you guys know how to use vegan ranch in the traditional sense. That’s not what this is, I’m going to show you some nontraditional ways to use ranch that will blow your mind!

Right before you bake off a loaf of bread, brush the outside with vegan ranch dressing. It will help with the browning and it will leave such a good flavor.

Have you ever heard of Elote?  Or Esquites? Instead of using mayonnaise on your corn, add this vegan ranch dressing recipe. This will be an Americanized version of the popular Mexican street corn!

Skip the tahini and add this vegan ranch dressing recipe! Perfect for parties, gatherings, sporting events, or even bar menus or restaurants!

Cook your mashed potatoes as normal, in salted water or roasting them. While you are mixing them, add a hefty portion on this vegan ranch recipe and you will not be disappointed!

Use this vegan ranch recipe to deliver an unheard of but delicious dinner to family or friends. Simply cook the pasta you want and save some of the pasta water. Then in a separate pan add the ranch and pasta water and reduce that into a sauce! Simple and delicious!

If you aren’t feeling the hot version. There is always pasta salad!!

Yup, pizza sauce! Try out some buffalo cauliflower wings on a pizza crust with a vegan ranch sauce. You could add some veggies and have a really awesome lunch/ dinner.

I don’t know why you don’t see this more often! Instead of using a gravy on your favorite fries, use this vegan ranch recipe. Then garnish with some vegan parmesan and more herbs and spices! You will be happy with this appetizer I promise!

Add a little water and cook your rice in this vegan ranch dressing recipe! Everything you need to make a delicious side of rice is already in this sauce. It may sound funny, but its unbelievably delicious!

Use ranch as your slaw dressing! Use the slaw on sandwiches, tacos, vegan burgers, or just as a plain side!

Given the properties of this vegan ranch dressing recipe, this can easily be turned in to a whipped cream or foam. Try putting that on a potato soup or even a carrot soup! People won’t know what to think after they taste how good it is.

Using a sharp knife also makes chopped herbs taste better for the same reason. If you bruise and smash your herbs with a dull knife, then your herbs release their oils onto the cutting board instead of the sauce.

Blend the base of your vegan ranch recipe in a blender. This will make sure you get a smooth consistency. Sometimes when you whisk mayonnaise with other liquids, its hard to get the lumps out. Buttermilk also will cause lumps due to the separation of milk solids.

Avoid this lumpy nuisance by blending all ingredients (EXCEPT THE HERBS) in the blender. You can blend the herbs if you want, but the ranch will be green and taste a little different.

Seasoning this sauce with salt, pepper, and lemon juice makes a world of difference. Don’t forget this step because it will make or break the sauce!

Store this vegan ranch dressing recipe in an airtight container in the ridge. Fully composed, this will last 4-7 days. You could get more from the shelf life if you mix the herbs with the base as you go.

Yes, it is!  Just to be safe I would check your spices before you put them in to make sure!

2. Why does blending the herbs change the flavor?

The reason that happens is because you get a lot more flavor from the herbs. It becomes more intense when pulverized into the sauce. Therefore, changing the flavor. It turns into a green goddess at that point!

4. Why use fresh and dried chives?

This vegan ranch dressing recipe gets its flavor from both renditions of chives because they both have different flavors to offer. I like to use both because the fresh chives have a bright and crisp flavor while the dried offer a deeper almost roast flavor.

Shout out to the other Vegan Blogs out there and their really good vegan ranch recipes! We appreciate you!!